"...manipulating the songs’ melodies and magical strings much as a puppeteer would with his strings. It’s tight, inventive, expertly played music..."

Guitarist Randy Napoleon plays with precision and delicacy as he and his sidekicks present music from Michigan jazz composer Gregg Hill. Following their 2019 collaboration on Brothers, Napoleon’s vision for this latest project was to team up with vocalist Aubrey Johnson for a sweetly blended sound. Napoleon emerged as the lyricist for “Puppets,” “The Unknown Ballade” and “Wide River,” while Gregg Hill’s lyrics are sung to the “Truck Driver’s Blues.” Johnson embraced that combo and enhanced it with her own sublime vocal styling on all of the tracks. Rodney Whitaker (bass), Quincy Davis (drums), Rick Roe (piano), Seth Ebersole (bass clarinet, flute), Brandon Rose (bass) and Will Crandell (drums) brought the vision to life with deep sensitivity to the material and some fiery intensity on their own. Seth Ebersole’s flute conveys a light, breezy tag to “The Jazzdiddy Waltz,” “Lyrica” and “Moonscape.”

Recorded in Lansing, Michigan, the music on the Puppets album conveys many musical moods. There is tension and release, as well as several expressions of solemnity and whimsy. The diversity in Gregg Hill’s compositions ranges from the smooth tones of the opener “Andy’s Lament” to the high-stepping, energetic “Fan-O-Gram” with Aubrey Johnson serving as an outstanding modern creative stylist with Napoleon’s fluid, tasteful improvisation. Whether the bluesy “The Jazzdiddy Waltz” or relaxed “Lyrica” tickle your fancy, we hear an atmospheric approach to music that results in bountiful rewards of deep emotion and range of expression.

Randy Napoleon is a premier player whose attention to precision, intonation and time values provides bountiful rewards. Born in Brooklyn and raised in Ann Arbor, Michigan, Randy cut his teeth on jazz in Detroit, moved to New York City, worked with Michael Buble and Freddy Cole, then in 2014 returned to Michigan as a MSU Professor of Jazz. That is where he met Gregg Hill, and their collaborations began. Together, they are manipulating the songs’ melodies and magical strings much as a puppeteer would with his strings. It’s tight, inventive, expertly played music pulled off with aplomb.

ALL ABOUT JAZZ REVIEW 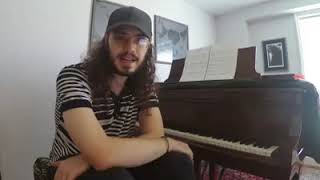 Ben Rosenblum: "Portrait of the Artist"